Tanmay Bakshi is not another ordinary kid. His extraordinary computer programming skill that too at the age of 14 sets him apart. Lives in Brampton, Canada, Tanmay built his first app for the iPhone when he was only nine years old and since then he has continued to develop apps and other computer programs at an astonishing rate as he acquired more programming languages. Tanmay is programming since the age of 5 and developed his first app at the age of 9. His first App was named tTable an app to teach multiplication to small kids. Since then he has developed various apps such as the youth-focused “I Can, We Can!” app, and tID Vault, along with tGuess, a number guessing game for Apple Watch and iPhone, just to name a few. Tanmay Bakshi also started a Youtube channel known as “Tanmay Teaches” at the age of 7 where he teaches Coding, Algorithms, AI and Machine Learning concepts about iOS, macOS, watchOS, Swift, Objective-C, PHP, VB, Windows, and SQL. His Youtube channel has more than 200 Thousand subscribers with more than 2,323,948 views since 2011. For about 6 years, he’s been busy sharing his knowledge and helping his YouTube Subscribers, 1 to 1, with solving their problems related to Programming, Algorithms, Watson, Math, and Science. 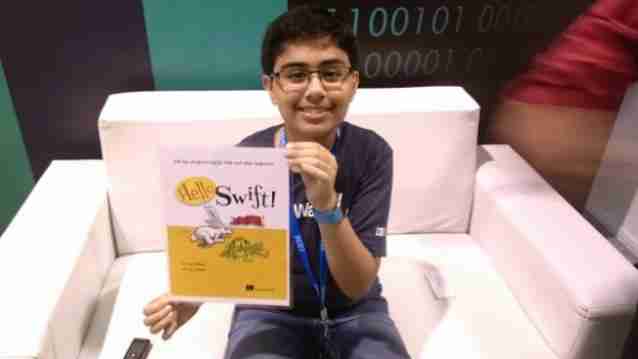 Taking further his passion for coding Tanmay taught himself, Swift, a powerful and intuitive programming language for macOS, iOS, watchOS, and tvOS when it was still in beta. He launched a book named “Hello Swift! – iOS App Programming for Kids and Other Beginners” The goal of this book is to help kids, and beginners, from around the globe, learn iOS Development in Apple Swift. You can buy the book from Amazon and Mannings

Tanmay has given many keynote speeches around the world such as in February of 2016, he was invited for a Keynote at IBM Interconnect 2016 in Las Vegas, where he announced and demonstrated AskTanmay one of his biggest creations, It is the world’s first web-based NLQA (Natural Language Question Answering) System to be powered by IBM Watson.

Also, in June of 2016, he was also invited as a keynote speaker to IBM DeveloperConnect in Bangalore, to announce the updates and the next version of AskTanmay, along with a demo. Tanmay also featured in IBM Cloud Tour 2016 Conference for a Keynote in Arkansas where he gave a presentation to around 80 people at the headquarters. At the age of 11, Tanmay came across an IBM service called Document Conversion which converts documents from one format to another, such as a PDF, to another format like HTML. Tanmay discovered a bug in the service and posted his findings on a programming website and on his personal Twitter.

Some IBMers find out about his findings and contacted him since then they became his mentors and assisted him in collaborating with IBM. After that IBM has invited him to many conferences as a speaker as I mentioned above.

Although Tanmay is not an employee of IBM, Tanmay has continued to partner with the tech company on various projects.

Tanmay’s latest work is related to the healthcare sector. It majorly deals with the neural network, a computer system modeled on the human brain and nervous system. According to Tanmay “Healthcare is a field that is really really ripe to be enhanced by AI.”

Tanmay’s ambition is to start his own company that focuses on research, and development and implementation of AI. The 14-year-old credits his rapid success to his parents, who he says have nurtured his demanding studies and are proud of his work.