NestAway is an online home rental marketplace for bachelors and families. Nestaway provides fully furnished and well-maintained rooms and flats for rent without any brokerage fee. The company is based in Bangalore and currently operating in 9 different cities across India which include Bangalore, Mumbai, Pune, Noida, Delhi etc. NestAway was founded by Amarendra Sahu, Jitendra Jagadev, Smruti Parida and Deepak Dhar in 2015, NestAway was started as a platform for bachelors but later started same services for families also.

In India, it is almost impossible for a bachelor to get accommodation at a good residential place. Bachelors are not always welcome in residential areas without prior verification or recommendation. 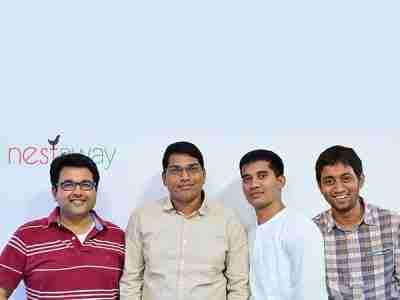 The similar sought of a problem was faced by one of the co-founders of NestAway, Amarendra Sahu when he was looking for a home after his graduation from IIM Bangalore. He wanted to fix this problem and felt this is something an online platform can fix by being a neutral third-party. That is how the idea of NestAway stricken to Nestaway founders.

Recently in May 2017, the Nestaway acquired a competitor company named Zenify which is based in Bangalore.

NestAway acts a medium between House owners and tenants. Nestaway makes sure that each room/flat on the platform should have basic facilities like furniture like beds and mattresses along with a side table, pillow and bed cover. Other than this, the company offers a sofa, dining table, DTH TV, WiFi, fridge, washing machine, induction cooktop, and utensils.

NestAway partnered with several house owners in different cities. NestAway provides insurance of up to 1 crore rupees to house owners against any damage.

NestAway has a very simple revenue model. They charge a standard commission of 12.5 percent of the total rent.The owners decide the rent, and generally, charge per person around 7,000-8,000 Rupees per month.

NestAway started with 5 houses in August 2014 and famed the company in November 2014. In January 2015 Nestaway officially launched its website and mobile application.

NestAways’s target audience is bachelors between 22 to 30 years of age. So they keep the focus on digital marketing. Nestaway online campaign #nestawayfromhome was big hit among the youth.

Nest aways has several competitors in the market but one that stands out of rest is “NoBroker.in” but NestAway is surely India’s largest online home rental marketplace. The reason why Nestaway really stands out is that the homes are rented out by bed spaces, and the furnishings and amenities are standardised.