PlaySimple is an Indian online mobile social gaming startup incorporated in November 2014. It is a team of Our of engineers, analysts, artists, managers, and designers, who work together to make fun and simple social games for smartphone users.

Headquartered in Bangalore the company was founded by Siddharth Jain, Siddhanth Jain, Preeti Reddy, and  Suraj Nalin and made some of the most popular games for Android and iOS platforms. 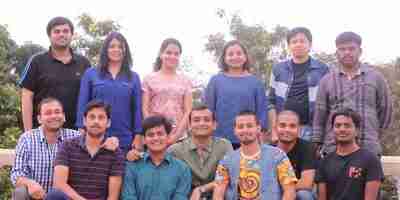 Siddharth Jain: Sidharth Jain who completed his studies from Narsee Monjee Institute of Managment Studies. Prior to PlaySimple games, Sidharth has worked as Product Lead at Zynga and also worked in Sun Microsystems, SMS GupShup, and CSC.

Siddhanth Jain: Sidhanth Jain is alumni of IIT-Bombay and worked as software engineers at Walmart Labs before starting PlaySimple games.

Preeti Reddy: Prior to PlaySimple Games worked in product management and management consulting at Zynga and Bains and Co.

Suraj Nalin: Suraj completed his graduation from IIT-Roorkee in Computer Science and worked as software developer for Zynga and  Yahoo.

Play Simple has publically released two games, Guessup and Wordtrek which are available on Google Play Store for Android Phones and Apple App Store for iPhones. Wordtrek is an addictive word game that can keep your mind engaged for hours.The game is available free on Google Play Store and Apple App store.This is a single player game in which a player has to guess the word from series of Alphabets. Like most of the other online games, PlaySimple company works on a freemium model where installation of the game is free but one has to pay money to buy virtual goods.PlaySimple largely caters to markets outside of India, namely US, Australia and Canada. It claims to have more than 10 million downloads for its two flagship products, GuessUp and WordTrek.

Company’s core source of revenue is display advertising. The company is delivering close to half a billion ad impressions every month. PlaySimple currently has about 22 people, and hope to ramp up that number to about 50 by end-2017. The company is targeting the revenue of 5 million to 7 million dollars in this financial year. In the financial year 2016-17, PlaySimple revenue was 3 million dollars.