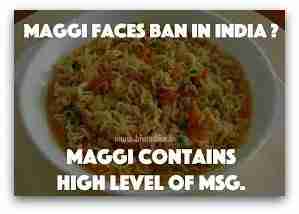 Indian food inspectors have directed Nestle India to call back their recently manufactured batch of Maggie noodles from the shops across the nation stating that it contains dangerous levels of lead.

Maggie however denies all these accusations and says that they follow strict quality control and food safety measures when it comes to using raw materials for making noodles.  They undertake inclusive testing to guarantee that the products conform to the valid food safety laws as well as their high standards of safety and quality.

Nestle Maggie argued that they know about the reports filed by the local authorities stating high levels of MSG in Maggie noodles. While they are still probing into the matter, Nestle India is also conducting their own investigation of the samples in an independently recognized laboratory and will share its results.

Nestle India officials declared that they do not add MSG to their noodles and the label decorations are in accordance with the local regulation. The ingredients used to prepare Maggie noodles contain naturally present Glutamate occurring in many agricultural commodities like peas, onions, tomatoes, etc. This could be mistaken as commercially added MSG. It is safe to consume Glutamate. 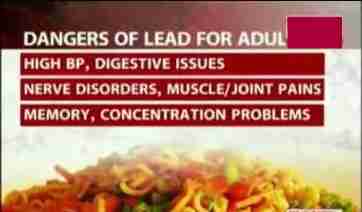 Food Safety and Drug Administration of Uttar Pradesh announced the presence of high level of lead while testing two dozen packets of Nestle Maggie noodles. Lead concentration found during the tests was recorded as 17.2 parts per million which is seven times above te permissible limit i.e. .01 ppm to 2.5 ppm.

As soon as the news was aired regarding Maggie ban, social media was pouring with different reactions on #MaggieBan. Mixed responses from the consumers were received – some were sarcastic whereas some really want Maggie to stay while others are concerned about their health. Twitter and Facebook users all seem to engage into #MaggieBan discussion about its safety as well as ban in the country.

@Vinita Deshmukh – Young mothers allow their kids to drool on Maggi noodles, pizzas and burgers – all of which create havoc to the child’s intellect and body.

@Brikesh – #maggi has high levels of MSG so it could be banned, what about some idiots who have high level of MCP?