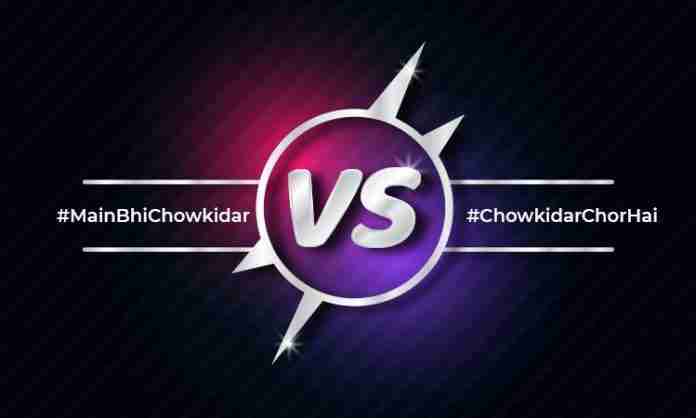 With less than a month to go for the Lok Sabha elections, BJP’s social media team is playing big on the frequently used word by Prime Minister “Chowkidar”. This is turning out to be a masterstroke from the world’s biggest party as ‘Chowkidar’ was the top trending word in India for the last two days and has become a sort of trend for the Modi supporters on Twitter.

Prime Minister Narendra Modi asked his supporters to be a part of the #MainBhiChowkidar (I too am a watchman) social media campaign.

Your Chowkidar is standing firm & serving the nation.

But, I am not alone.

Everyone who is fighting corruption, dirt, social evils is a Chowkidar.

Everyone working hard for the progress of India is a Chowkidar.

Today, every Indian is saying-#MainBhiChowkidar

This tweet posted by the prime minister on Saturday was the most engaging tweet which had the hashtag #MainBhiChowkidar. PM Modi’s tweet received around 55,000 retweets and more than 1,50,000 likes.

No sooner did Modi do it, than members of his Cabinet and BJP supporters followed suit. Among senior Bharatiya Janata Party (BJP) leaders and members of his ministry. Besides using hashtags #MainBhiChowkidar and #ChowkidarPhirSe on Twitter, Twitterati also added ‘Chowkidar’ prefix to their names. This tweet by BJP’s president Amit Shah received more than 18k retweets and 63k Likes. The tweet is showing a video of people being aware of the Swachh Bharat Abhiyan was the most engaging tweet. The tweet also has both the hashtags #MainBhiChowkidar and #ChowkidarPhirSe.

You can keep trying Mr Modi, but the truth cannot be extinguished.

Every Indian is saying it. #ChowkidarChorHai

Rahul Gandhi responded to the Twitter trends saying, “You can keep trying Mr. Modi, but the truth cannot be extinguished. Every Indian is saying it. #ChowkidarChorHai.” Rahul’s tweet received around 11,000 retweets and 37,000 likes.

Twitter statistics show that both the hashtags #MainBhiChowkidar and #ChowkidarPhirSe ruled Twitter last week. #ChowkidarChorHai was used by the Congress supporters, however, it couldn’t amplify on the social media platforms to the extent #MainBhiChowkidar did.

To put in Numbers #MainBhiChowkidar received around 1.5 million mentions on Twitter, followed by #ChowkidarPhirSe with used for about 3,00,000 times. The #ChowkidarChorHai received hardly 1,63,000 mentions, which is almost 10 percent of the number of times #MainBhiChowkidar got mentioned.

With their Chowkidar campaign BJP has shown that when it comes to social media presence and campaign techniques, the party is way ahead of other political parties. It was the BJP that was setting the narrative and the Congress was playing catch-up.

Apart from the great success of the whole campaign, there was a small goof-up from the team. Due to automated responses, the prime minister’s Twitter handle even ended up thanking those who trolled the whole chowkidar campaign by us their hashtag. PM Modi was also thanking fake accounts of fugitives like Nirav Modi.

This #MainBhiChowkidar campaign has backfired so badly

And that's why you are seeing tweets like this 👇@RoflGandhi_ pic.twitter.com/zdLyBrOlRS

#Chowkidar is a strong move in the history of social media promotions for a political campaign.

Will have to wait & watch out of its impact on BJP’s success in #election2019.

What do you think all the digital marketers out there? pic.twitter.com/5wR4fREYF1