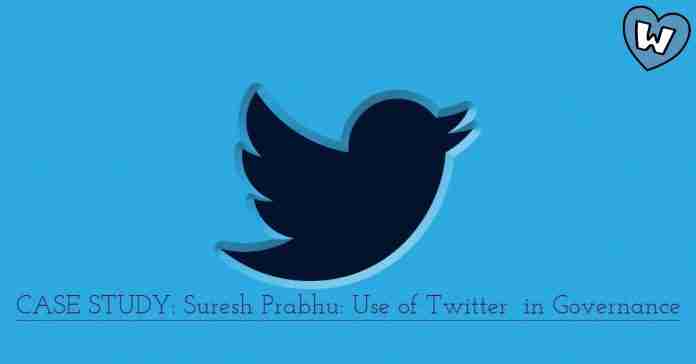 The impact of Social Media on Governance:

The Current Indian government has made its mark on social media in a big way. Almost all the important ministries have their twitter handles to engage with the public directly. This new model of e governance has been accepted with open arms by both public and government officials. This initiative taken by the many ministries has enabled them to address the grievance of any individual and also getting the feedback or suggestion on various facilities provided by the government.

The External Ministry and Ministry of railway are leading among other ministries in addressing the public grievance posted on twitter.

Who is Suresh Prabhu?

Suresh Prabhu is the current Railway minister of India in Narender Modi government. He is currently representing the state of Andhra Pradesh in Rajya Sabha. He is Chartered Accountant by profession and also the member of Institute of chartered accountant of India.

Suresh Prabhu is one of the most active Indian Politician on Twitter with @sureshpprabhu as his twitter handle. He is currently having 3.35 million followers on Twitter.

Even the followers on twitter handle of Railway ministry(@RailMinIndia) are currently 2.93 Million. According to a report, Railway ministry is handling about 7K to 8K tweets on daily basis and taking required action on each one of them.

1) A student from Dehradun tweeted to the Suresh Prabhu and Ministry of the railway asking for the food because his train was delayed by seven hours and there was no pantry on the train.After few minutes of his tweets, he got the reply from Ministry of Railway’s twitter handle asking his berth number and mobile number. After getting a reply from that student official supplied him a water bottle and a meal.

2) In another such incident where a woman tweeted to Ministry of Railways as she was seeking help because a male fellow passenger was harassing her. She immediately got a reply asking for her PNR number and coach number to send the required help immediately.

3) Govind a passenger from Rajasthan tweeted to Ministry of Railways and Railway minister Suresh Prabhu about a TTE who was charging extra money for seat confirmation.Just after few minutes, he received a reply from Ministry of railway that his complaint has been forwarded to the concern authorities after which a vigilance officer boarded the train and investigate the case.

These are few of the many such grievances that railway ministry and Suresh Prabhu is handling on the daily basis. So as we can see this a great way of grievance redressal but this can’t be the only way because the count of everyday passengers in Indian Railway is 30 Million whereas the count of total twitter user in only 22.2 million. So we have to come up with other such ideas so that we can include as many passengers as we can in this chain.