Quickr is an Indian company based in Bangalore. It is an online classified advertising platform. Founded by Pranay Chulet and Jiby Thomas in 2008 was initially launched as Kijiji India in 2005. In 2008 Matrix Partners India, invested in Kijiji and re named the brand as Quickr which is jointly owned by Matrix Partners India and eBay Inc. Quickr has listing in over 900 cities in India in categories such as Mobile Phones, cars, service, education, and jobs etc. It is primarily a consumer to consumer transaction based platform where you can sell old or new stuff in your locality or city. 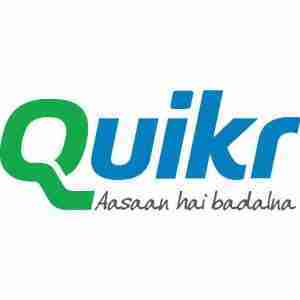 In 2014 quicker raised 90 million dollar funding from Tiger Global and yet another 60 million dollars by Kinnevik. Till now quicker has raised around 350 million dollars funding in 7 rounds. Quickr has been backed up by some of the world’s most reputed investment companies like Kinnevik, Nokia Growth Partners, Warburg Pincus and eBay Inc.

Quickr founder and CEO Pranay Chulet has studied from IIT Delhi and IIM Calcutta. After that, he spent around a decade in the US and worked in many roles in Walker Digital, Price Water House Coopers, Booz Allen Hamilton. Pranay Teamed up with his former colleague Jiby Thomas to start Quickr. Localization: Quickr keeps its constant focus on localization. Tapping the Indian mentality of buying stuff from within the city Quickr has created such a market place where you can buy or sell stuff in your neighborhood.

Quality: Quickr Success story underlined that Indian start ups can be successful if they focus on quality and user experience over growth metrics. Quickr delists around 40% of daily listings due to quality issues. There is a team of around 100 members for quality check of each and every listing.

Quickr’s focus on quality user experience makes it more successful than its competitors.

Quickr focuses on both consumer to consumer(C2C) and business to consumer(B2C) model. While C2C helps the individual person to buy or sell, the idea behind B2C is to help small businessmen who can’t afford their E-commerce website to make their online presence.

Quickr is generating revenue in two ways on Quickr.com. First is to take money from advertisers for display advertising and second is by generating the leads for small businesses. Quickr is earning half of its revenue from lead generation and premium listings.

Quickr also provides instant messaging service on its mobile app to chat with your potential buyer and make the deal then and there.

In January 2016 Quicker acquired a real estate portal commonfloor.com at 200 million dollars and merged it with its own real estate divisions Quickr Home.Then in July 2016 acquired Hiree.com to expands its reach into white collar jobs and collaborated with We chat to provide the instant messaging facility on its App and Website.

Quickr has only one direct competitor in the online classified market in India which is OLX. OLX is also an Indian company formed in 2006 by Amarjit Singh Batra. Even though Quickr is a much bigger company in terms of scale and funding but still OLX is a tough competitor. Right now Quickr is winning the race but still, they have to keep their game up to stay ahead of OLX.

Quickr is available on Google Play Store and Apple,s App Store for mobile users and you can also access it through the web(http://www.quikr.com).