They say when the wheel was invented there was a revolution. Hyundai, the South Korean multinational automotive manufacturer is so true to this saying that it recently embarked upon to create perhaps an epic scale advertisement to promote its Genesis Sedan.  Hyundai’s brand slogan “NEW THINKING. NEW POSSIBILITIES.” reflects the will of Hyundai Motor Company to create new possibilities to benefit the world and its people by encouraging and developing new thinking. This “NEW THINKING” campaign has been proved veracious to the company’s slogan by the recently made Hyundai advertisement titled “A Message to Space”, which has been recently posted on Youtube.

Stephanie from Houston, Texas misses her astronaut father currently researching at the International Space Station as he has to stay for long periods of time away from home let alone Earth.  She wanted to send a special message to her longing father and show her love to him. She just wished that her message reaches to her father (who is a photo buff and is seen holding a satellite camera in the ad) who might when see down though his space station cherishes her daughter’s love for him through her message. How was this achieved? Hyundai made sure to succeed that cars too can send a message to people who stay for most of the time in space away from their families.

For its new advertising campaign, the brand Hyundai beat the record of the world’s largest message written with traces tire. Eleven cars were requisitioned in the dry lake Delamar in Nevada to recreate the message that Stephanie wanted to send to her father: “I love you.”

The Korean automaker used eleven Genesis sedans to write this message on sand that would be visible from the space station. What they did was drive these cars on a long stretch of sand that’s big enough to write Stephanie’s message making at the same time sure that it is viewable from space, then they fitted the cars with special tires that dig more into the ground and they were sent to leave the tracks thus created. The end result was this- 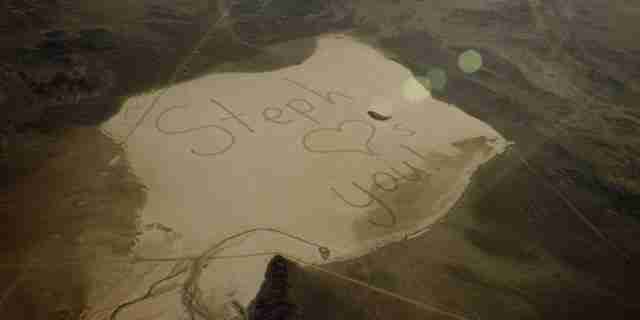 We don’t want to be a spoiler for you, but yes, this was something that actually happened and yes the message was visible from space that was photographed through satellite, as attested by the Guinness record people.

How is it rolling?

Within 3 weeks the youtube advertisement has got over 54 million views, which is a huge figure for sure. This grand endeavor by Hyundai just goes on to prove nothing but the fact that so much could be achieved when thought properly that creates so many new possibilities, very true to the company’s tagline. And not just that, it’s a giant attempt to hit bull’s eye in socially marketing and advertising a product. To view the ad click here-