Star Plus is counted among one of India’s most viewed Entertainment Channels along with Sony, Zee TV and Colors. There was a time when Star Plus was the top but these days it is facing a tough competition from its competitor channels. STAR network is the biggest entertainment company in whole Asia and Star Plus is a part of it. 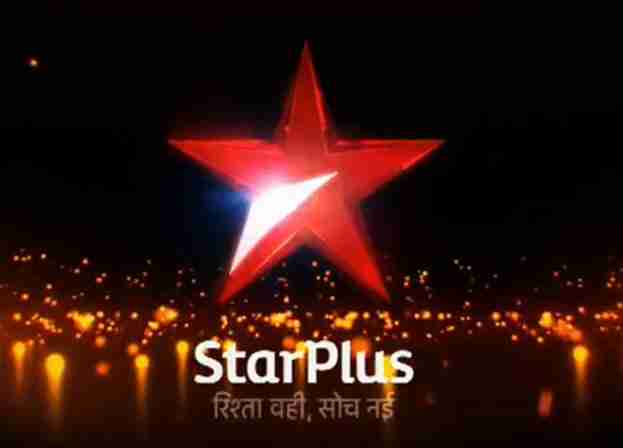 Talking about the social media strategy then, this brand is present on almost all the major social networking sites. All the communities Star Plus owns are huge by size and the content on their pages is totally focused on the shows which are being telecasted by this channel. In spite of this they are capable of maintaining a decent engagement of their followers, as we know the fact that it is quite difficult for any fan page to maintain engagement of their fans when it is already having a huge number of followers.

The community of this brand on Facebook is having more than 2.6 million followers. As I previously mentioned that the content revolves around the shows being telecasted on this channel. The best part is that the brand manages to engage people with the content being posted on the page. They do not post simple information about their shows but make it interactive by asking questions and starting campaigns. 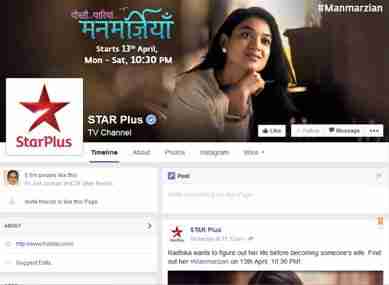 They keep on posting pictures, videos related to their shows and these days they are busy in the advertisement of their upcoming show named “Manmarzian”. Trailers of the show can be seen on the page. 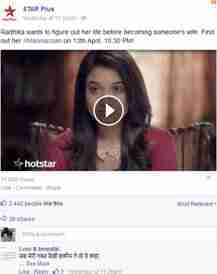 Viewers can also get connected to Instagram page of Star Plus as a link is provided on the page for this. All the videos related to the shows can be seen under the videos tab. So if you have missed your show then, you can get a glimpse of that show here. Star Plus on Twitter: Number of followers is quite high on twitter and on twitter too you can get a glimpse of the upcoming show “Manmarzian” on their cover pic. 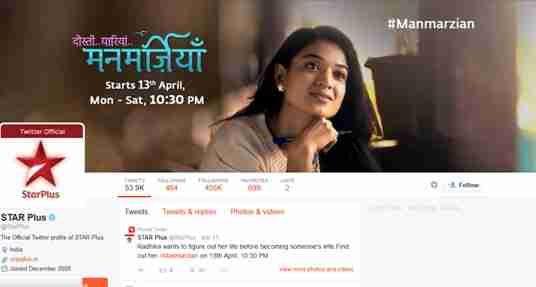 These days the channel is doing full on promotion of their upcoming show and fans can get to see this on twitter as well. 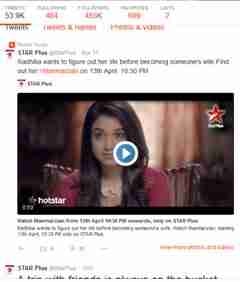 Star Plus on Google+: Star plus is present everywhere means nearly on all social media platforms. Going through their Google plus page I came to notice that they have huge popularity on G+ as well. The count of views and followers is quite high. 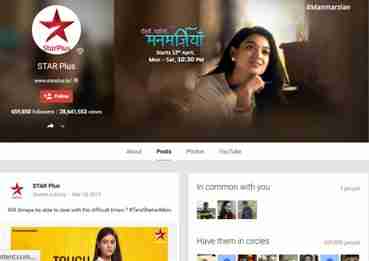 What I found disappointing about this page is they are not regular with this page and even they haven’t shared anything from last twenty days. This behavior is surely not acceptable in social media world. But the common thing about their Facebook, Twitter and G+ page is that all of them are having same cover picture. 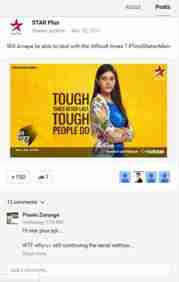 Star Plus on YouTube: Well the fourth platform where Star Plus is present is YouTube. They have their own channel there and one can easily subscribe their channel here. 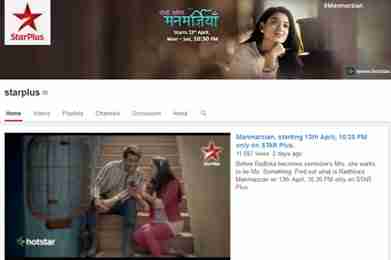 They are promoting “Manmarzian” here also. Well you can get videos of all your favorite shows in their channel. The brand is always talking about the show it produces on social media and people completely like their stuff posted on these platforms.