Ever since the release of the webisode, AIB Knockout on youtube on 28th January. The team of AIB and the celebrities who were a part of this event have been subjected to much criticism as well as fame, where on one side the older generation being absolutely appawled by it and filed a decent number of FIRs, whereas on the other hand we have the youth, the media and several celebrities who are providing their support to the event and questions the state of the ‘hypocritical’ minds of those who are against it.

AIB Roast, as you have probably heard it – is the first of it’s kind in India and judging by the history of mankind anything new which goes beyond the ‘Conventional Mainstream’, always recieves both appraise by the ones hungry for a change and criticism from those who are comfortable with things as they were and are.
But the real question is, as a society, will such events be a moral threat to our cultural integrity or an awakening of a less hypocritical and judgemental society?
Yes, the concerns raised are practical and even though the contents of the video were presented purely with the intent of making people laugh( as explained by the AIB team’s open letter released on 4th February on their Facebook page), the truth about entertainment remains, ‘What we watch, is what we follow.’ and public release of usage of abusive and explict language may very well cause the younger generation to start the same in public would be inappropriate in our moral society. But then, by claiming that this video can cause disturbance in the values of our society, are we not also questioning the sensiblity of each individual of the very same society? 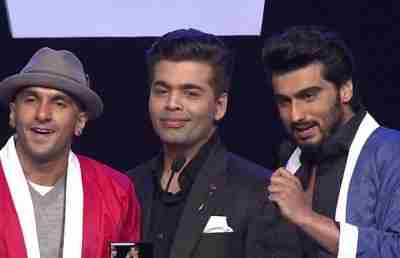 “AIB Knockout: The roast of Arjun Kapoor and Ranveer Singh, is a comedy show which took place in Mumbai on 20th January and was uploaded on Youtube on the 28th Januanry. A number of celebrities like Karan Johar, Deepika Padukone, Alia Bhatt and more were present in this event and sportly suffered a few roast on themselves. On 3rd February the video was taken down from Youtube due to the rapid increase of controvosy against it. Several FIRs have been filed in Mumbai and Pune against 14 persons who were a part of this project. While a number of critics, censor board members, politians and celebrities have shown their disgust in the matter and are demanding to persecute the people involved with the video, A number of celebrities, mediapersons and companies through advertisement are appreciating the new form of comedy and are providing their support to the team of AIB.”

After all, the video did came out with a proper disclaimer explaining all that has been said, was said only with the interest to make people laugh and entertain and not to promote or initate any form of propaganda against other’s views, religious or cultural. If our society believes that it’s pure and free from vulgarity then each one of those 8 million viewers probably had the “conscience of what they read and heard at the beginning of the video”, it was repeated time and again that if one is offended by vulgarity or abusive humour, do not watch this.

So by stopping such videos to go public, are we suggesting that we as humans(intelligent superior beings) do not have enough sense to decide whether to watch a video or not according to that individual’s beliefs, which explains in advance of its contents?
Each side has it’s own prespective and the questions raised by both sides, equally important. But the points which very few of us raise is that, are we that entertainment dependent that responsible citizens of our civilized and cultural society cannot judge for themselves as to how one should morally behave in public and will get influenced by a comic show? The concern that yet again, when any undesirable situation occurs the first thing we do is start pointing fingers and blame anyone and everyone related to the event.
Hence, this controvosy may turnout to be regretful or revolutionary or even just a public debate till the ‘next big thing’ occurs and will fade away. With that being said and on account of other current pressing concerns faced by our country, it would be righteous enough to say that our society might be in need of a little revolution.